So a few weeks ago, I noticed that I had 99 posts. I kept thinking that I needed to do something special for #100. Of course, by thinking this, I kept procrastinating the "special" post. So I'm just going to post everything that I've thought of in the past few weeks, so this might get a little long.

1) Our Halloween party was a success. Some pictures of our costume (The Dude and Maude Lebowski from the Gutterballs scene) and some of the food: 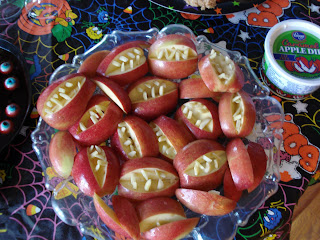 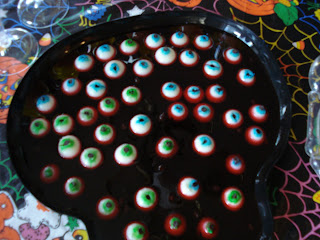 "Finger" cookies (my sister added the 'dirt" and "blood" details): 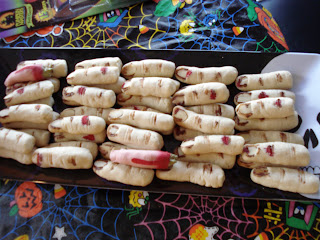 Our costume (the dress took FORVER to make, but it turned out pretty well): 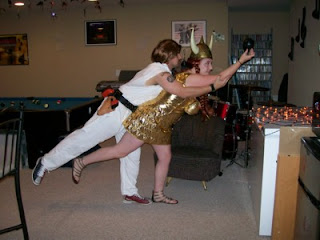 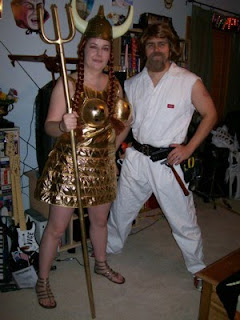 2) While my sister and her husband were visiting, they told us that they had decided to move here to live closer to us (and our parents who live about 6 hours away)! They will be moving here in March.
3) November 15th would have been our approximate due date if IVF had worked. D said that we needed to do something special just the two of us. I loved that he was the one that suggested it. He even was the one to bring it up in the first place. He told me he had been thinking about it, and it made him sad. The day didn't turn out according to plan (something I've decided must be the theme of my life). D was working on his beloved Jeep the day before, on the leaky gas tank, with a friend of ours. They didn't get finished, so needed to finish on the 15th. While they were working, another friend came over to help. Then his wife called and decided that she and their 7 month old needed to visit. Then D's parents kept sending picture after picture of D's sister's new baby. So instead of us getting to spend time alone mourning what could have been, we were instead inundated with other people's babies. After they left, we cuddled on the couch with the fireplace on, drank hot cider, and watched How I Met Your Mother. So all in all, not a horrible night, just, again, not exactly what we had planned.
4) A student asked me if I had any kids, I said no. Then she asked if I was going to, I said no. Then she asked why not, so I told her we couldn't. That finally shut her up. Then a week later another student asked me WHEN I was going to have kids. This time I just said "that's a really personal question, don't you think?" That at least made her feel awkward too. After class, she told me she asked because she couldn't remember if it was me or another woman she had talked to that had said she didn't want kids ever. I told her if she had led in with that, that would have been a lot better.
5) I went to see the new Harry Potter, and liked it, but still think the book is WAY better. I've seen all the movies with the philosophy of "I'll see it once, but I don't need to own them to watch over and over." This one is a lot darker, and more people die, so it made me cry. And then I saw a little boy running back with some popcorn, and I cried some more knowing that I will never have a child to share Harry Potter with. That made me think about all the other things that I won't get to pass on.
6) My brother sent me a picture of his son cuddling with my dad for an after Thanksgiving nap. It was cute, but made me sad that I won't ever see my dad cuddling with my kid.
7) D and I are going to visit my parents near Christmas. At first I was thinking we could be there ON Christmas, but now I'm thinking maybe we should do Christmas just the two of us (maybe dinner with his parents), and then go to my parents the day after. I just don't know if I'm ready to be happy watching my nephew open gifts from Santa, knowing that I will never watch my child doing that.
8) The last three things make it sound like I am not doing well at all with this whole childless not by choice life. Most days I am totally fine, and can even see some perks to it, I just know that certain images really press my buttons. And I think, for this first year, it's okay to avoid them when I know that they will only make me sad. Now the hard part is explaining to my parents why we won't be there on Christmas when we could.
Posted by Jules at 10:45 AM

Jules
My husband and I were married in 2008, and a few months later started trying to get pregnant because I was 33. More than three years later, I'm now 36, we went through IVF treatment, and didn't achieve a viable pregnancy. We are now transitioning to what will be a child-free life. We aren't preventing pregnancy, but I am no longer tracking ovulation days (well, I still notice the signs, I just no longer make sure we have sex!), so if we do ever end up pregnant, it will be a miracle (since we have like a 1% chance of it working naturally) and a surprise.